Last year saw strong margins on fuel sales and the continuation of acquisitions among some of the smaller groups by the larger independents. However, as per the last few years there has been a relative lack of stock and it has remained a seller’s market.

Whilst the Brexit uncertainty may be a little less we haven’t, and are unlikely to, see a significant change in the levels of demand for sites in 2020. However, with some of the oil companies that have previously exited the direct retailing market returning, as well as TOTAL re-emerging as a brand in the UK, we expect demand for good quality sites to remain. Likewise, we expect continued demand for new to industry sites from the oil companies and the independents. At this pace, 2020 could see a net addition of sites over the course of the year. 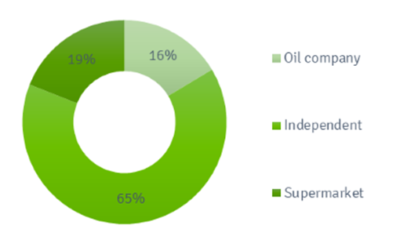 Whilst the independents make up more than 50% of the market(*) it’s interesting to see that oil companies appear to be moving back to operating sites themselves. Harvest took over HKS last year, Gulf have been opening new sites and Jet have acquired a number of existing forecourts. With the bigger oil companies also likely to follow, competition remains strong for opportunities.

On existing portfolios we also expect to see some more refurbishments/redevelopments to enhance sales. This will be both with some clever use of the existing property and some complete redevelopment. There are sure to be some more groups selling out but there are relatively few left that won’t have already considered the option in some detail.

2020 is likely to see electric vehicles continue to dominate the news but perhaps less so on the forecourts themselves. At present there has been some limited uptake, but unless a forecourt has sufficient space to accommodate long term parking and sufficient demand to make it worthwhile, this position is unlikely to change significantly. Where we are likely to see it happen more is on new to industry sites (notably, there were 54 in 2019). With councils being extremely keen on environmental and green issues, we expect new builds to require some level of electrical charging as part of any planning consent.

This is not to say electric is not making a difference, there is strong demand from operators and we are expecting some stand alone electric charging petrol stations this year, along with the continued rollout of charging points across the UK. Forecourt operators will need to consider this if they lose traffic and therefore custom to other locations but this is a part of the industry that is certainly here to stay.